A Control Panel used to operate up to 2 downhole receivers in analogue mode, including the Extra High Temperature ASR-1 (up to 225 °C Rated), GSR-1 and ASR-EHP sondes.

A universal power supply and control for all analogue operation of the GeochainTM product range. 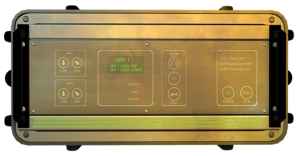 The DCP-2 is the surface controller panel for the ASR, ASR-EHP, ASR-EHT, GSR and single dual geophone systems.

The DCP-2 has a universal input power supply unit which accepts either 110 or 230V ac mains power at 50/60Hz. In addition, the DCP-2 may be operated from an external 12V dc power source, e.g. a vehicle battery. The 12V dc input connector is disconnected by a relay when ac power is present, so cannot be used as a power source. The DCP-2 is protected against reverse battery connection by a zener clamp and a self-reset fuse.

Alternate use of wireline 7

The DHA (downhole amplifier) module requires negative current for operation. Positive current is blocked by a diode and may therefore be used to operate an optional Gamma section, which may be located either above or below the geophones.

Motion monitor and alarm: The DCP-2 provides a responsive 6-channel monitor display as that tool motion can be observed during run-in. The display is sensitive enough to be used as a background noise monitor. The DCP-2 also provides a (lack of) motion alarm which monitors the vertical component of the lowest tool and sounds a warning if the tool appears to have hung up.

Remote Control
If used with our GSP recording system, the DCP-2 may be remotely controlled from the ACQ acquisition software.
Connectors

The winch and line 7 connectors remain as for the DCP-2 and Geochain GPP. Early DCP-2 units have a D25 type signal interface connector and require the AS968 cable. Later units incorporate a 1.5m captive cable, terminated with a GSP compatible 14-19P plug.

Tool connector: The tool connector SK1 (the circular 9-pole 20-21S socket) may be connected directly to an analogue ASR or ESR tool via our AS961 test cable. A cable simulator is not required. For connection via a wireline, use cable AS959.