The Russian oilfield service company TNG-Group, has been formally congratulated by their client operator Pao Novatek for an excellent VSP service, with operation turnaround and data quality facilitating well completion at the Kharbeyskoye field, North Russia “..ahead of schedule”. 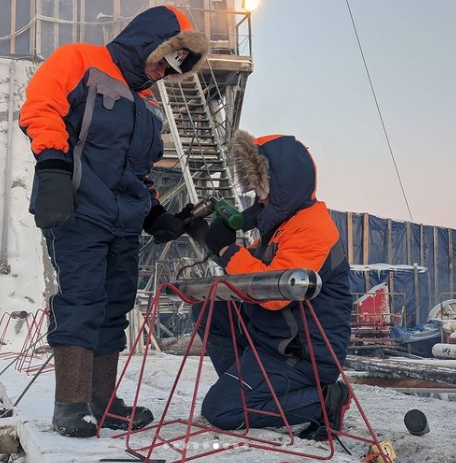 Avalon had the pleasure of supplying the TNG VSP service team with the latest iteration of the industry acclaimed Geochain string. Their 24 level system boasts the latest X-series electronics and Quad 3C sensor pack housed within the ASR high pressure tool body. This provided high quality signal/low noise data and exceptional tool robustness, even when operating within hostile borehole (and surface) temperature conditions.

The field engineers of the No.25 Logging team lead by Expedition Head Rinat Vildanov were trained by Avalon in the deployment and seismic acquisition of the system. They have now been specifically identified by the operator for their efficient orgnisation and survey mobilization. Avalon is delighted to see the working synergy of well trained field engineers with robust downhole tools, and so demonstrating how complex VSP surveys can be achieved with minimal downtime and ahead of schedule.

Based on this success TNG have stated publicly that the “…authority of our company as a reliable partner is strengthened, cooperation with which customers value.”

Since this completion on the 17th of November this year, the field operator NOVATEK-TARKOSALENEFTEGAS has successfully started pilot production from gas condensate deposits at the Kharbeyskoye field, part of the North-Russkiy cluster located in the Tazovskiy District of the Yamal-Nenets autonomous region.  The multiple VSP survey’s were conducted under challenging conditions accommodating both COVID considerations and an average working surface temperature of -57oC!

“The Kharbeyskoye field launch will make a significant contribution to NOVATEK’s natural gas and liquid hydrocarbon production volumes”, – noted Leonid Mikhelson, NOVATEK’s Chairman of the Management Board. – “One of our strategic priorities is maintaining the production levels in the area of the Unified Gas Supply System, and we are continuing to develop the North-Russkiy cluster which plays an important role in our strategy.” (ref. Novatek.ru).